The immediate predecessor of Prague Castle was Levý Hradec which was the central seat of power of the Přemyslide dynasty, lying to the north of Prague. Here in the seventh decade of the 9th Century, Prince Bořivoj built the first Christian church in Bohemia, dedicated to St. Kliment. After his return from the Great Moravian Empire where he was christened (probably in 883) the prince moved with his entourage about 10 kms south to a parched hill above a bend of the Vltava called Praha (Prague). Around 885 he founded here the second Christian church in Bohemia dedicated to the Virgin Mary and next to it a new princely residence, the foundation of the future castle and town.

The original fortified settlement, surrounded by wooden pallisades and a moat, was sited approximately in the place of today’s third castle courtyard and Jiřské Square. Inside the fortifications, sometime after 920, Prince Vratislav built the second Prague church, the basilica Sv Jiří (St. George). His son Prince Václav (Wenceslas), prior to 929 had already founded the third church, the rotunda of St. Vitus. This church soon became the cult centre of the whole country as here was buried its founder Prince Wenceslas considered soon after his murder to be the patron saint of Bohemia. In 973 the Prague bishopric was inaugurated and the Church of St. Vitus became a cathedral. By the same year at the latest, next to the Church of St. Jiří, the first convent in Bohemia was founded, run by Benedictine nuns, whose abbess traditionally came from the ruling family. The connection between the secular and religious centres was established at that time.

In 1003-4 the Castle was occupied by the army of the Polish Prince Boleslav the Brave and in 1041 was besieged by the German Emperor Henry III who managed to set fire to the wooden fortifications. Having learned from this experience, Prince Břetislav I not long afterwards, built new fortifications which, partly at least, consisted of stone walls. From 1070 some princes – beginning with Vratislav II – preferred to live in Vyšehrad but Prague Castle still remained at the centre of their interest, as it continued to be the seat of the Prague bishop. Parallel with the building of the Vyšehrad church of Sv. Petr a Pavel (S.S. Peter and Paul), a new basilica founded by Vratislav’s father Prince Spytihněv II, was completed on the site of the rotunda of St. Vítus.

Around 1135 Prince Soběslav I decided definitively to move back to the Castle and started extensive rebuilding here. He built new stone fortifications with numerous large towers and started the construction of a Romanesque royal palace. Soběslav’s fortifications spanned only a part of today’s Castle area which soon proved to be too constricting. Therefore King Přemysl Otakar II, in the second half of the 13th Century approved the building of new walls, which joined onto the fortifications of the recently founded Malá Strana (Small Quarter). The royal palace was also enlarged but soon burnt down. In the period of confusion following the murder of the last Přemyslide King, Wenceslas III in 1306 and even during the rule of King John of Luxembourg (1310-1346) the Castle went into decline. In October 1333, when the heir to the throne Charles, the later king and emperor Charles IV, arrived in Prague, he found the Castle so desolate that at first he had to be accommodated in the Old Town. Soon he devoted himself to a grandiose scheme of repair and rebuilding: in 1344, with the help of his father John of Luxemburg, he laid the foundation stone of the St. Vítus Cathedral, which to this day dominates the Castle panorama in a masterly way, and finally rebuilt the whole complex into a prestigious royal residence. 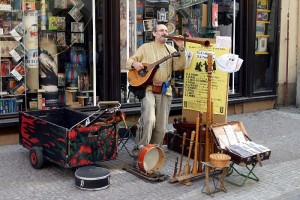 The building activity lasted even after the death of Charles IV (1378) and was interrupted only by the Hussite Wars (1420- 1434), after the ending of which, the Czech rulers mainly resided in the Králův Dvůr (the Royal Court) in the Old Town. In 1488 King Vladislav Jagellon returned to the deteriorating Castle and had it rebuilt in the style of the late Gothic period, stressing not only the official purpose of the building but also heeding the personal comfort of the sovereign. The royal architect Benedikt Ried first of all rebuilt the fortifications, adding huge bastions for artillery. Afterwards he started rebuilding the royal palace in which, in place of the previous throne room of Charles IV and other two rooms he built the monumental Vladislavský Sál (Vladislav Hall), then the largest, secular space in Prague.

The fortified gothic palace could not totally satisfy the demands of a rapidly developing military technology or the new Renaissance lifestyle which fully established itself in Prague with the arrival of the King and later Emperor Ferdinand I Hapsburg. This monarch after the destruction by fire of the Castle in 1541, entered into an extensive Renaissance rebuilding programme not only of the living quarters, but also of the environs of the Castle. Behind the Stag Moat he founded a large renaissance garden with a Royal summer house.

During the reign of Emperor Rudolf II (1576-1611), Prague Castle enjoyed its last great flowering. The emperor founded here the famous picture gallery, built the prestigious Španělský Sál (Spanish Hall), new stables and other buildings. After the battle on the White Mountain in 1620, the importance of the Castle declined. The Hapsburg rulers lived largely in Vienna and for this reason no High Baroque buildings were constructed at Prague Castle as opposed to the settlement beyond the Castle walls. Only during the reign of the Empress Maria Theresa in the second half of the 18th century, was there a final period of large-scale modification to the Castle. The imperial architect Niccolo Pacassi added the first courtyard and joined together, buildings in disparate styles, with a late Baroque facade, which gives the Castle its present majestic appearance.

In the second half of the 19th Century a beginning was made to the completion of St. Vítus Cathedral, which was duly reopened in 1929 on the occasion of the 1000 year anniversary of the murder of St. Wenceslas. After the creation of the Czechoslovak Republic in 1918 it was decided to renew the Castle tradition and transform it into a prestigious presidential residence. This task was given to a Slovenian architect Josip Plečnik, who adapted the Castle buildings, linked the courtyards by new paving and also modified the Castle gardens. Apart from further minor work, the architectural development of Prague Castle was now, in principle, finished.