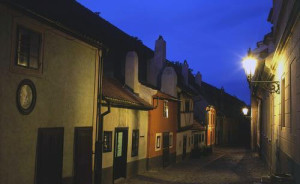 The street known as Golden Lane came into being in the late 1400s when the wall was constructed as fortification. The houses, however, weren’t built until 1597 when Emperor Rudolf II had them made for the 24 archers who manned the wall. He made a number of stipulations, including that the houses had to be installed completely within the wall. Number 13 is the only house that is the original tiny size, all the others have extended beyond the wall’s limits.

The houses were built in the Mannerist style which is sandwiched in the history of aesthetics between the end of High Renaissance (1520) and the beginning of Baroque (1600) and is characterized by its artificial, rather than natural, qualities. It was a style much loved by Rudolf II, a strange, obsessive man with a profound interest in art and the occult. It is said that the name Golden Lane comes from his deep interest in alchemy and the alchemist community he installed in the houses, trying to turn base metal into gold. More probably, the street got its name from the goldsmiths who occupied the dwellings in the 17th century.

Fifty years after construction, the houses had been reduced to 14 and archers were no longer living there, the era of defense and fortification having come to an end around the time they first moved in. Instead, the houses were inhabited by artisans such as the goldsmiths. The street’s character descended into poverty and poor workers and artists took over from the artisans in the 1800s. In the 20th century, still a slum area, three people who would become famous lived in these houses. Franz Kafka occupied No. 22 in 1916 and 1917; Jaroslav Seifert, who won the Nobel Prize in Literature in 1984 and who was one of the signatories of Charter 77, lived there in 1929; and Madame de Thebes, a French fortune teller who brought the occult spirit of Rudolf II back to Golden Lane, and who was executed by the Nazis for prophesying the end of Nazism.

People lived in these houses right up until 1939.