On the terrace in front of the Palace, a mosaic outlines the oval ground plan of the baroque kaple sv. Matouše (Chapel of St. Matthew) pulled down in 1791. Our attention however is attracted to the facade of the Loreta (Loretto) of Hradčany [No.100/7], one of the most popular sights in Prague.

By the Loretto, or Svatá chýše (Santa Casa), is meant the small building in the centre of today’s complex. According to legend the house in which the Virgin Mary with baby Jesus lived in Nazareth, was transported by the angels in 1291 to Italy and in this way was saved from the infidel who usurped the Holy Land. Even in Italy the angels moved the house a few times until they found a suitable site in the southern Italian town of Loretto near Ancona. The house was deeply venerated and in the Baroque period replicas were built in many places in Europe.

The Loretto’s Santa Casa in Prague was built between 1626 – 1631, financed by Kateřina Benigna of Lobkovic. Fifty years later the place of pilgrimage was already surrounded by cloisters to which after 1740 an upper storey by Kilián Ignác Dientzenhofer. The same architect also built the Church of Narození Páně (the Church of the Nativity) and the entrance wing with its tower. 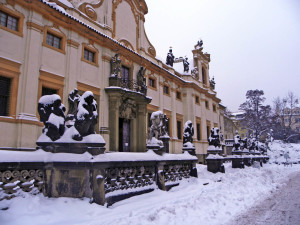 Prior to entering we will consider the Loretto carillon hanging in the tower at the front. The bells are best seen from the terrace in front of the Černín Palace. The carillon was ordered at the end of the 17th century by a citizen of the Small Quarter, Eberhard of Glaukov, from the renowned Amsterdam bell maker Claudius Fromm. For the Prague Loretto the bellmaker selected a total of 27 bells with a range of 2.5 octaves and a total weight of 14 hundred weight. In Prague the bells were put together by the clockmaker Peter Neumann and consecrated; the patron of the highest bell was the Emperor Leopold himself. They rang for the first time on 15 August 1695.

The carillon can be rung in three different ways. The oldest and simplest is the straightforward tapping out of the melody by metal hammers fastened to the bells. Also it can be used on the principle of the orchestrion – installed inside the clockwork mechanism was a cylinder with pegs which during the movement activates the rod which starts the striking of the hammers on the bells. Usually it is the Virgin Mary hymn “We Greet Thee a Thousand Times”, which can be heard. The third method of playing originates in Holland. The bells are connected to piano keys which can be played in a similar way to an organ. Some composers have even improvised on this keyboard including František Škroup and Ferenc Liszt.

In the courtyard of the Loretto is the Svatá chýše (Santa Casa) built in 1626-1627 by Giovanni Battista Orsi. In 1664 it was adorned with stucco reliefs depicting the lives of Old Testament prophets, the Virgin Mary and various saints. Represented on the narrower side, turned towards the Church of the Nativity is the legend of the translocation of the Loretto Santa Casa. Inside it a beam and several bricks from the original Italian Loretto have been incorporated. On the altar is a statue of the Virgin Mary made in black ebony. One wall was intentionally damaged in one particular place: this imitates the damage in the original chapel, which was struck by lightning, supposedly as punishment for blaspheners. Under the Santa Casa is the tomb of the founders of the Prague Loretto, the Lobkovic family. On the two sides of the shrine are two Baroque fountains with a statue of the Assumption of the Virgin Mary and the Resurrection of Christ.

Laying down the foundation stone of the Saint Hut on 3 June 1626 meant the beginning of the history of the entire pilgrim place. The first benefactor and founder of Loreta was Benigna Kateřina of Lobkowicz, Loreta remained under Lobkowicz patronage till the beginning of 20th century. The appearance of the place was partially modified in 19th century, later in the period of 1950’s – 1960’s a new treasure house was built up and open to public.
The pilgrim place is constructed as a closed complex of the buildings around the central Saint Hut with rectangular floor arcade yard (differing from the Italian Loreta where the Casa remains in the interior of the pilgrim temple). Today church of The Lord’s Birth (on the longitudinal axis) and the two of the chapels (in the middle of the northern and southern wings) were in the original plan from the 60’s of 17th century the mere shallow alcoves with the altars. The more the reputation of Loreta grew up the more the number of visitors increased and it became necessary to enlarge the liturgical spaces of the pilgrim place. Therefore the bigger rectangular chapels in the yard’s corners were gradually (by the end of 17th century) built up and consequently both chapels were enlarged in their transverse axes and in several phases the Chapel of the Lord’s Birth was reconstructed to a spacious church.